Located on Corsica’s rugged west coast, the island’s capital city, Ajaccio is a beguiling port city full of pleasant surprises. The centre is compact and easy to wander around. The small maze of narrow, and sometimes cobbled streets in the old town, is definitely worth exploring, particularly for its great restaurants. There’s also a vibrant farmers’ market nearby, and a 15th century fortress (Citadelle d’Ajaccio). 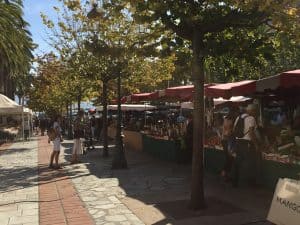 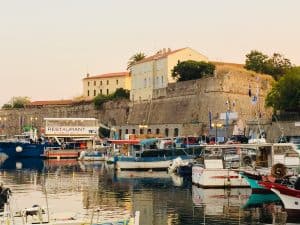 Although, it’s not open to the public, tourists can walk around the perimeter of its impressive battlements and, if you are lucky, hear the braying donkeys that graze on the grass inside the compound. Stay, as we did, in the Hotel San Carlu Citadelle overlooking it, and you could well be woken by the donkeys’ deep and regular bellows! A few minutes’ walk from here is the tiny city beach, a short stretch of sand that sweeps the bay. 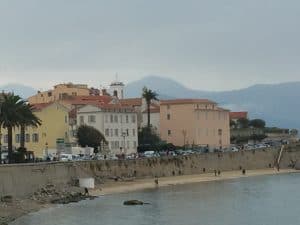 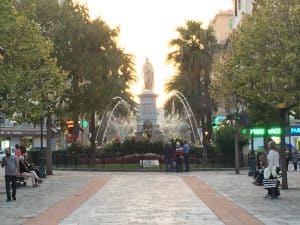 However, for many visitors to Ajaccio, the star attraction is the house where Napoléon Bonaparte, France’s military leader who led some campaigns during the French Revolutionary War and later became Emperor of France was born. It’s impossible to ignore the island’s links to such an important figure in European history: reminders are everywhere – there are museums, statues and even a grand café named in his honour.

If learning about Napoleonic history interests you, then a visit to Maison Bonaparte, located in a small side street, has to be top of your list.  It’s a small museum but is packed full of amazing facts about his early life.

For instance, you can see the room where Napoléon came into the world in August 1769, the son of Carlo and Letizia Bonaparte, and where he and members of his family lived whenever they were in Corsica. I discovered that they narrowly escaped the English occupation in the 1790s and then later on, Napoléon left for the French mainland to further his military career and acquire vital experience on Europe’s battlefields.   When the family was in residence, the house was extended and refurbished. Over time it became progressively larger, and was passed down to Napoléon’s descendants over the years.

The museum is brimming with historical artefacts, the rooms having been painstakingly restored to give an impression of what life might have been like at the time of the family’s residence, even if the house is no longer set out exactly as it was in the late 18th and early 19th century.

As you wander from floor to floor through the rooms, there are some notable period pieces – salons with tables and chairs, bedrooms set out with grand wooden chests of drawers and beds, (including the one that Napoleon reputedly slept in), paintings of Napoleon and his family members, and busts on top of marble fireplaces.  I was particularly fascinated by the framed family trees hanging on the walls, mapping out the genealogy of the extended family (I’m not so sure though about the death mask also on display). 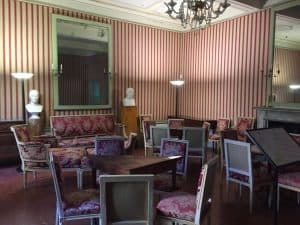 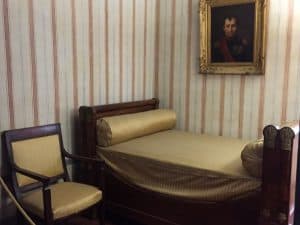 Visitors should take advantage of the audio player that’s available in multiple languages. As you make your way around the house, it offers a wealth of historical detail that will enhance the overall experience. There are some interesting stories about life in the house – for example, the audio player points out an unobtrusive and seemingly insignificant trapdoor sitting underneath a pair of wooden chairs (see below) which you discover provided an escape route via the basement for whenever Napoleon needed to evade capture (apparently stairs to upper floors were often not installed in those days to prevent pillaging). 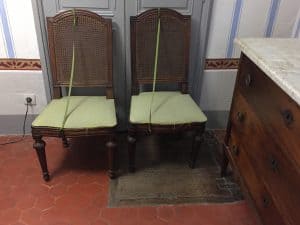 Equally fascinating was the insight I gained into both the personal and professional life of the man.  I read about his marriage to Josephine in 1796 (who – unbeknown to me before I visited – was not actually born a Josephine, but a Marie-Josephe: Josephine was a name adopted by the great statesman), and how the union failed when the couple were not able to conceive a child.  Napoléon later married a second time to the daughter of the Emperor of Austria and a year later, his heir, Napoléon II was born.

I also realised the extent of Napoléon’s influence; not being an historian, my knowledge of Napoléon was based largely on his defeat at the Battle of Waterloo and his subsequent exile.  However, in the same year that he married Josephine, he also became general-in-chief of the army in Italy; after taking up several other posts, he then became Emperor of France in 1804 and King of Italy in 1805.

He ended up abdicating and was exiled on the Island of Elba (somewhere else I’d now like to visit…), not far from Corsica. He later escaped, rallied his loyal French troops and fought his last battle at Waterloo which took place in the then United Kingdom of the Netherlands (now Belgium) in 1815.  His defeat brought an end to the Napoleonic Wars.

He then briefly went to England before being imprisoned on the volcanic island of St Helena in the South Atlantic, spending his final years in exile.  So it was a life of true ups and downs and periodic prominence and withdrawal; maybe this is reflected in his view that “Impossible is a word only to be found in the dictionary of fools”.

For me, the museum illustrates how travel is a great educator. Would I have chosen to read up about Napoléon had I not visited Corsica?  Probably not.  But being in a place with so many connections to such an important historical figure makes it nigh on impossible (or arguably, slightly remiss) to not take some time to learn about him.

Ajaccio’s not just about the here and now and a charming old town with great local cuisine, stunning and rugged scenery and glorious weather: there’s much, much more to Corsica’s capital than this.

Click here for other things to see and do in Ajaccio...

There’s a great deal to do in Ajaccio, aside from exploring the history of its most famous son.  This includes the Musee Fesch, a fine arts museum in the heart of the old town. Check out the website for opening times as even in peak season it does not seem to be open every day.

You can take a short stroll along the promenade and around the perimeter of the city’s fort (where you may be lucky enough to see – and hear – the donkeys who live in the dry moat here) to the beach (St. Francois Beach).  This is more of a city beach and not quite as idyllic as some of the others on Corsica’s coastline, but given how central it is to the city centre, it’s really not bad with some impressive views in both directions.  We spent a leisurely afternoon chilling out here before retreating to one of the buzzing yet relaxing outdoor bars a short hop across the road from the beach.

To get more of a fix of Napoléon and a lovely lunch or afternoon tea, head to Le Grand Café Napoleon on the aptly named Cours Napoleon in the centre of town.

If you fancy a quick trip out of town and a chance to see some stunning scenery, head to Parata and the walk towards the Sanguinaires Archipelgo. See my earlier post for more information. 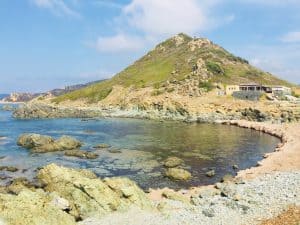 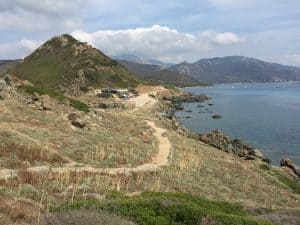