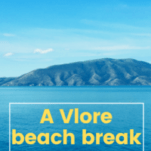 We’d decided we wanted to check out the Albanian coast as part of our wider trip to the country.  But as we drove into the coastal resort of Vlore, I wondered if I’d made a big mistake.

We’d arrived in the middle of a fierce storm.  The town was deserted, waves were whipping the seafront and everything was grey.  As the car wound its way out of the town to our hotel above Vlora Bay, I wondered if this was really the beautiful Albanian coast I’d read about…

But what a difference a day makes.  We woke up the next morning to a gloriously sunny day and breathtaking views out into the bay.  A good reminder that everything looks a bit downbeat and miserable in the rain.

Why did we choose Vlore?

We chose Vlore for our trip to the Albanian coast because of its relative proximity to the capital, Tirana (it’s about a three-hour drive).

We were also interested in its history, Vlore being the place where the country’s declaration of independence from the Ottoman Empire took place in 1912.  It therefore provided a great opportunity to relax on the Albanian coast whilst learning more about a country that we knew relatively little about.

Vlore is a sizeable resort. It is notable for its long palm tree fringed promenade along the seafront (Plazhi i Ri) and a main street leading away from the ferry port to Flag Square (Sheshi i Flamurit).

The Monument of Independence

In Flag Square, the country’s independence is commemorated with its Monument of Independence and the national flag with its double-headed black eagle.

It’s also in this area where you can find the 16th century Muradi Mosque. There ‘s also the Historical Museum and Ethnographic Museum.

Opposite Flag Square you will see a communist monument and if you climb the steps, you’ll get a good view over the city. Likewise, if you head for Kuzum Baba with its tyrbe/monument high on the hill.

Looking at the new developments that sit side by side with older buildings, it is clear that regeneration is occurring at a fast pace here and that a lot of money is being invested to modernise the town.

The Museum of Independence

If you’re interested in Vlore’s role in Albania’s break for independence from the Ottoman Empire, visit the Museum of Independence. This is a short walk from the port.

For less than £1 you can walk around a handful of rooms in the original headquarters of Ismail Qemali, the leader of the independence movement and head of the first government after 1912.

Most of the information in the museum was in Albanian. However, we were lucky that an English speaking guide was on hand in the museum who was able to talk us through the displays.

We learnt some interesting facts and I was particularly fascinated to hear about the discussions that were had amongst other European leaders about where the Albanian borders should be drawn (the country was very nearly much smaller).

We were also told about how the creation of the first government was a true coalition, representing the Muslim, orthodox Christian and Catholic groups in the country.

Other than this, Vlore is all about its coastal location, offering a smattering of cafes and seafront restaurants along the promenade.

This part of the resort feels much more European than some of the other more medieval or communist places we visited in Albania. The food has a distinctly Italian touch (pizza, pasta and seafood) – probably not surprisingly given Vlore’s location opposite Brindisi (you can catch regular ferries to and from the Italian port).

This said, Vlore is, I have to say, not the prettiest of seaside resorts I’ve ever visited and there is only a small beach.

My advice would be to head up out of the main town to the smaller resort area of Uji i Ftohte. It’s here where you soon realise why you made the effort to come.

There are hotels along the cliffs above the town that have simply stunning views of the Bay of Vlora and Karaburuni Peninsula (apparently, an amazing place for hiking).

The water is clear and turquoise blue (a cliché I know, but it really is!) and the views are spectacular.  This is when you start to see just what the guidebooks are talking about.

Would I recommend Vlore for an Albanian beach break?

Overall, I’d definitely recommend Vlore for an Albanian beach break. It’s relatively easy to get to from the capital Tirana, and makes a nice beach break to combine with a few days of frenetic sightseeing in the capital.

Combine a stay outside of the town with trips in to find out more about its history and you’ll no doubt have a great few days away.

How to get to Vlore

You can reach Vlore from Tirana in three ways. You can use public transport – either bus or furgon.

The latter is apparently quicker than the bus but only leaves when the vehicle is full, so you may be delayed while you’re waiting for it to fill up. These drop off passengers at the Muradi Mosque so you’d probably still need to take a taxi to your hotel.

As we were travelling on a time budget (and I didn’t find it that easy to locate bus timetables to check the times that they went), we took a taxi. This was around a three-hour drive and cost £70.

They only seem to run at certain times, however, with no return bus after 3.30 pm in the afternoon, so make sure you check out timetables.

We were only on the Albanian coast for a few days so getting around by public transport or taxis was fine.  However, if you plan to stay for longer, I would suggest you hire a car so you can venture further along the coast.

Where we stayed for our Albanian coastal break

We stayed in the Hotel Liro. Although not a luxury hotel, with relatively basic rooms, it is set on the cliff overlooking the sea and the views are amazing.

There is a restaurant here (as well as a really cool bar and restaurant on the road above) and there is a small pool if you don’t want to venture into the sea to swim (which is a little rocky).

And if you like going to sleep with the sound of waves crashing onto the rocks below, you’ll love this place!

As an Amazon Associate, I earn from qualifying purchases